Turtuk is a village in the Leh district of Jammu and Kashmir, India.[1] It is located in the Nubra tehsil, 205 km from the Leh town, on the banks of the Shyok River.[2] Turtuk gram panchayat is the northernmost village of India. Turtuk was under Pakistan's control until 1971, after which India gained control of this strategic area.[3][4] It is predominantly a Muslim village, and residents speak languages including Balti, Ladakhi and Urdu.[5] Turtuk is the last outpost in India after which the Pakistan-controlled Gilgit-Baltistan begins.[6] Turtuk is one of the gateways to the Siachen Glacier.[7][8]

Tourism in and around Turtuk[edit] 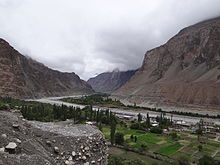 Turtuk was opened to tourists in 2009. The village offers views of Beautiful Valley, part of the Shyok Valley. Though a Muslim village, there are a few gompas located on the plateau above the Shyok River and there is an old royal house to see in the village. Turtuk is one of the few places in India where one can witness Balti culture, and one can find a few homestays and guest houses in the village. It is the last major village where tourist activity is allowed before the Line of Control.[citation needed]

In August 2010, the village of Turtuk was impacted by floods which occurred throughout the entire region of Ladakh. 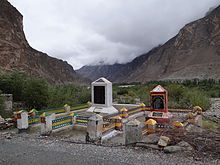 After India and Pakistan gained independence, Turtuk came under the control of Pakistan. India's Ladakh Scouts and Nubra Guards under the command of Colonel Chewang Rinchen recaptured it during the Indo-Pakistani War of 1971. Colonel Rinchen was honoured with a Maha Vir Chakra for his gallantry and a street is named after him in Leh.[9]

In 1999, the two countries once again had massive conflicts around this area during the Kargil War. There are a few memorials built in memory of soldiers on Main Road going towards the zero point of the India–Pakistan Line of Control.[citation needed]

Balti scholar Senge Sering states that Pakistan's Inter-Services Intelligence (ISI) has attempted to introduce jihad into this area. The local people are confused about their loyalties because they lived under both Pakistani and Indian control, some of them having served in the Pakistan Army before India's take-over. Many of them also have relatives living across the Line of Control subject to intimidation by the ISI. During the Kargil infiltration by Pakistan, some of the local people were suspected to have assisted the infiltrators. The Indian Army took some of them into custody, but later released all of them. The local people are said to be grateful for the consideration shown by the Army and currently support the Army's initiatives such as the Operation Sadbhavana.[10]