Likir Monastery or Likir Gompa (Klud-kyil) is a Buddhist monastery in Ladakh, northern India, located approximately 52 kilometres (32 mi) west of Leh. It is picturesquely situated on a little hill in the valley,[1] in Likir village near the Indus River about 9.5 kilometres (5.9 mi) north of the Srinigar to Leh highway.[2] It belongs to the Gelugpa sect of Tibetan Buddhism and was established in 1065 by Lama Duwang Chosje, under the command of the fifth king of Ladakh, Lhachen Gyalpo (Lha-chen-rgyal-po).[3]

Although Likir is relatively isolated, it was once on a major trade route which travelled via Tingmosgang, Hemis and Likir to Leh.[4]

Likir is mentioned in the Ladakhi chronicles as having been erected by King Lhachen Gyalpo (Lha-chen-rgyal-po) (c. 1050-1080 CE).[5] The name Likir means "The Naga - Encircled", representing the bodies of the two great serpent spirits, the Naga-rajas, Nanda and Taksako.[2] It presumably, originally belonged to the early Kadampa order of Tibetan Buddhism.[6][7]

When Francke visited the monastery in 1909 he was shown a long inscription written in black ink on a wall which outlined the history of the monastery. Francke had it copied and interprets it as follows:

"King Lha-chen-rgyal-po founded the monastery in the 11th century. In the 15th century, Lama Lha-dbang-chos-rje [a famous pupil of Tsongkhapa] converted the lamas to the reformed doctrines of the Ge-lug-pa order, and thus founded the monastery afresh as a Ge-lug-pa establishment. Then it is stated that seven generations after Lha-chen-rgyal-po, King Lha-chen-dngos-grub [c. 1290-1320] arose, and that he introduced the custom of sending all the novices to Lhasa. This statement is found in exactly the same words as we find in the rGyal-rabs"[8]

Eighteen generations later King bDe-legs-rnam-rgyal reigned, but his name has been erased from the inscription because he was forced to embrace Islam after the battle of Basgo in 1646-1647. The inscription itself is dated to the reign of King Thse-dbang-rnam-rgyal II (Tsewang namgyal II, c. 1760-1780), who repaired the monastery after a conflagration.[5][9]

View from the monastery

Below the monastery was a large chorten with frescoes inside representing Tsongkapa and other lamas of his time. "Painted above the door, a very strange figure is found which looks much like one of the ordinary representations of Srong-btsan-sgam-po (Songtsän Gampo). I was told by the lamas that it represents a lama of Srong-btsan-sgam-po's times. The figure wears a three-pointed hat of white colour and carries two leopard skins under his arms." The lower part of the chorten is a square room which a lama said was the earliest temple at Likir, and was already there when King Lha-chenrgyal-po built the monastery.[5]

The monastery currently has approximately 120 Buddhist monks and a school, in which almost thirty students study.[3] The Central Institute of Buddhist Studies runs it and teaches in three languages, Hindi, Sanskrit and English.[2] It also serves as the venue of an annual event Dosmochey, the assembly of votive offerings and sacred dances which takes place on the 27th day to 29th day of the 12th month of the Tibetan calendar.[3]

It is the seat of the Ngari Rinpoche, the present emanation of whom is the younger brother of the Dalai Lama. Although he does not permanently reside here, he attends for the more important pujas.[10] 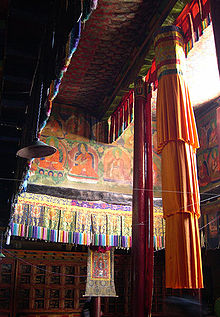 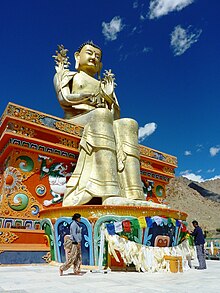 The monastery has two assembly halls, known as Dukhangs and the older one is located on the right of the central courtyard with six rows of seats for the lamas and a throne for the Head Lama of Likir.[7] The Dukhangs contain statues of Bodhisattva, Amitabha, three large statues of Sakyamuni, Maitreya and Tsong Khapa, founder of the yellow-hat sect.[3] The verandah has thangka paintings of the Guardians of the Four Directions and wheel of life mandala held by Yama and the courtyard has a large Jupiter tree, a rare species.[7] The Dukhang contains glass-fronted bookcases holding the Kandshur and the Thandshur and two rolled-up thangkas hang from the beams close to entrance containing pictures of Sakyamuni and Likir's guardian divinity.[7] The monastery is also a repository of old manuscripts, has a notable thangka collection and old costumes and earthen pots.[2][7]Sitting on the roof is a 23-metre (75 ft) high gilded gold statue of Maitreya (the future) Buddha. It was completed in 1999.[11]

A Mahakala thangka in Likir

The newer Dukhang, about 200 years old is located diagonally across from the courtyard's entrance and contains a statue of Avalokitesvara with 1000 arms and 11 heads.[7] Bookcases stand at the statue sides, with the volumes of the Sumbum, describing the life and teachings of Tsong Khapa. The left wall has paintings of the 35 Confessional Buddhas while the right wall has an image of Sakyamuni with two of his chiefs by his side.[7]

A ladder leads out of the hall, followed by a doorway into the courtyard which in turn leads to the Zinchun, which is the head lama's room which contains mainly thangkas and images of lamas and the 21 manifestations of the White Tara, the consort of Avalokitesvara.[7] Then there is the Gonkhang room which is dedicated to the guardian divinities which is accessed by descending the stairs outside the courtyard of the head lama's room. The Gonkhang was created in 1983 when the monastery underwent renovation and was completed a year later[12]The walls of the Gonkhang contain thangkas of the divinities as does a glass-fronted room in front of the Gonkhang.[7]