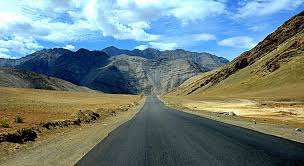 The Culture Hub of Ladakh 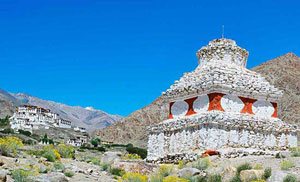 Why Book With Us?

You are guaranteed getting the lowest Ladakh tour package & hotel booking price if book with us, since we are based locally, there is no hidden cost, add-on commissions, or any third party handover of your tours operation.With our payment system you can avail easy EMI options too. We let you travel first and pay later.

We use the latest line of transport (Innova Zylo cars & Mini turbo bus) well trained drivers with mountain driving license. Our guides are trained for high altitude and mountain sickness rescue.To secure your payments, we use CCAvenue payment gateway with easy EMI.

Served more than 1000-plus guest every year, recommended in many tour guide books. We are among the oldest tour companies in Ladakh. Our representative are ready to attain you 24/7 while you're in Ladakh. Booking with us your tour and money is always in safe hand.

Rock carvings found in many parts of Ladakh indicate that the area has been inhabited from Neolithic times.[12] Ladakh’s earliest inhabitants consisted of a mixed Indo-Aryanpopulation of Mons and Dards,[14] who find mention in the works of Herodotus,[b]Nearchus, Megasthenes, Pliny,Ptolemy, and the geographical lists of the Puranas.[15]Around the 1st century, Ladakh was a part of the Kushana empire. Buddhism spread into western Ladakh from Kashmir in the 2nd century when much of eastern Ladakh and western Tibet was still practising the Bon religion. The 7th century Buddhist traveler Xuanzang describes the region in his accounts.[e]

In the 8th century, Ladakh was involved in the clash between Tibetan expansion pressing from the East and Chinese influence exerted from Central Asia through the passes. Suzerainty over Ladakh frequently changed hands between China and Tibet. In 842 Nyima-Gon, a Tibetan royal representative annexed Ladakh for himself after the break-up of the Tibetan empire, and founded a separate Ladakhi dynasty. During this period Ladakh acquired a predominantly Tibetan population. The dynasty spearheaded the second spreading of Buddhism, importing religious ideas from north-west India, particularly from Kashmir. The first spreading of Buddhism was the one in Tibet proper.

“… Then further west, The Tibetans encountered a distinctly foreign nation — Shangshung, with its capital at Khyunglung. Mt. Kailāśa(Tise) and Lake Manasarovar formed part of this country, whose language has come down to us through early documents. Though still unidentified, it seems to be Indo-European. … Geographically the country was certainly open to India, both through Nepal and by way of Kashmir and Ladakh. Kailāśa is a holy place for the Indians, who make pilgrimages to it. No one knows how long they have done so, but the cult may well go back to the times when Shangshung was still independent of Tibet.
How far Zhangzhung stretched to the north, east and west is a mystery … We have already had an occasion to remark that Shangshung, embracing Kailāśa sacred Mount of the Hindus, may once have had a religion largely borrowed from Hinduism. The situation may even have lasted for quite a long time. In fact, about 950, the Hindu King of Kabulhad a statue of Vişņu, of the Kashmiri type (with three heads), which he claimed had been given him by the king of the Bhota (Tibetans) who, in turn had obtained it from Kailāśa.”

A chronicle of Ladakh compiled in the 17th century called the La dvags royal rabs, meaning the Royal Chronicle of the Kings of Ladakh recorded that this boundary was traditional and well-known. The first part of the Chronicle was written in the years 1610–1640 and the second half towards the end of the 17th century. The work has been translated into English by A. H. Francke and published in 1926 in Calcutta titled the Antiquities of Indian Tibet. In volume 2, the Ladakhi Chronicle describes the partition by King Skyid-lde-ngima-gon of his kingdom between his three sons, and then the chronicle described the extent of territory secured by that son. The following quotation is from page 94 of this book:

He gave to each of his sons a separate kingdom, viz., to the eldest Dpal-gyi-gon, Maryul of Mngah-ris, the inhabitants using black bows; ru-thogs of the east and the Gold-mine of Hgog; nearer this way Lde-mchog-dkar-po; at the frontier ra-ba-dmar-po; Wam-le, to the top of the pass of the Yi-mig rock …

Faced with the Islamic conquest of South Asia in the 13th century, Ladakh chose to seek and accept guidance in religious matters from Tibet. For nearly two centuries till about 1600, Ladakh was subject to raids and invasions from neighbouring Muslim states, which led to the partial conversion of Ladakhis to Noorbakshi Islam.

How To Reach Ladakh

The nearest airport is at Leh, which is well connected to Delhi, Jammu, Srinagar, Chandigarh, Mumbai . From the Leh airport, hire a cab to reach Leh city has several accommodation options. Nearest Airport: Leh Airport (IXL) - 5 kms from Leh town

Road If you don't want to take flight, then you will have to reach Manali or Srinagar via trains and buses and then from Manali or Srinagar, you can catch a bus or a cab or even a shared taxi that drops you directly to Leh. The road from Manali to Leh is said to be one of the most picturesque routes of the world. A lot of people cover this route on their motorbikes, especially on Royal Enfield motorcycles as the terrain is a bit bumpy. Some cycle enthusiasts also cover this distance over their bycycles.

As mentioned, the city is at a very remote location with minimal resources available. So the region does not have a railway station. However, the nearest railway station is Jammu Tawi (700 km from Ladakh) which is well connected with Delhi, Kolkata, and Mumbai.

The mystic and awe striking region of Ladakh is surrounded with gorgeous scenery and travelling through this region can indeed be a pleasure. There are buses, taxis, motorcycles and bicycles available for getting across Ladakh and you can choose the one that you deem fit.

Initially we thought the prices are very competitive compare o some operators we inquire in Mumba and pune. My wife was doubtful that we might not get the service promised. You people proved all wrong with your fantastic help, specially you staff  took care my son who was sick  first day. Through out the trip we felt very safe, at any point we get a chance to meet someone traveling to Ladakh we will refer you. Thank you team.
Charle Lorm

To Whom It May Concern:    Having been working in Ladakh since 1995, both researching the various editions of my guidebook Trekking in Ladakh (Trailblazer Publications) and leading treks, I have found Footprints Adventure to be one of the best Tour organizer in the region. Nawang Namgil’s attention to detail, interesting itineraries, understanding of the needs of foreign tourists, professionalism and above all, responsible attitude towards the culture and environment of Ladakh means I have no hesitation in recommending his services.
Nirmala and Sanjay Pune-2016

Dear footprints Thank you so much for arranging our beautiful trip to ladakh Your palce is very beautiful and people are nice too. We really had great time especially with Mr. Paddy who guide us through the old market of Moti street. Drive Nurbo was very nice he take cares of his car so well . Nubra valley trip was our highlight; hope we come back again someday. Nirmala and Sanjay Pune
Raj Desai and family Mumbai

What a whirlwind tour of this beautiful Ladakh. Absolutely fell in love with all the wildlife and adventure we experienced here. Was a great chance to truly be one with nature? Special mention to Footprints for the  day hike you arrange for us oo, very accessible and helpful staff. Will be coming back to Footprints again for my next holiday. Raj Desai and family  Mumbai
Our trip to ladakh in 2014 (V. Parkash and family, Bangalore)

reason to choose a local based tour company  In 2014 I booked family tour with a big online company who spoiled entire our trip On arrival no one pick us up from airport, the hotel was something different low grade, there was no one to listen us despite several call on their tool free no. We had to miss two days of our major program and returned back home and tried to get refund but it was next to impossible with so many excuses.  In 2016 we came back again to visit those places we have missed my soon, we choose someone from the ladakh itself and found www.ladakh .com.  Their service was very good from the airport itself we had a wonderful time, my wife had a mild high altitude the first night we ring their No. Mr. Paddy from footprints came to the hotel at 12.pm and arranged us a doctor....
Ladakh Snow Group

Dear Paddy & Namgil  Thanks for arranging everything perfectly, the group is very happy, for sure there is next team coming to ladakh in 2017. your service and care will bring you lots of recommendations keep it up make Footprints is the best. Sonal Mumbai
Rajgopal & family Chennai

We really appreciate all the effort and hard work done by Footprint especially in paying attention to minute details through our journey. We have taken many trips around the world and I can say this one was one of the best because of your hard work and effort. We would like to thank you for making our trip full of fun and memorable moments. We would strongly recommend your travel agency our friends and family. Rajgopal and family Chennai
Mera Nahar Delhi, India

Dear Footprints StaffÂ Our trip to ladakh in 2015 wasÂ  a wonderful arrangementWith all your detail program and help. Specially your drive who took us to pangong lake , feelÂ  very safe with him. Thank you so much we always recommend your serviceÂ MeraÂ  and friends (Delhi)"
Anand Khetan (Mumbai)

A spectacular trip. Completely enjoyed the Buddhist trail and visiting all the monasteries. Really appreciated the recommendations on the personalized brochure and tried as many as possible. The best experience was the local farmhouse experience. Truly got an insider's perspective into the daily lives of the Ladakh region. Thanks to Footprint . Anand Khetan (Mumbai)

To Whom It May Concern:
Having been working in Ladakh since 1995, both researching the various editions of my guidebook Trekking in Ladakh (Trailblazer Publications) and leading treks, I have found Footprints Adventure to be one of the best Tour organizer in the region. Nawang Namgil’s attention to detail, interesting itineraries, understanding of the needs of foreign tourists, professionalism and above all, responsible attitude towards the culture and environment of Ladakh means I have no hesitation in recommending his services.